How a Car Aircon System Works 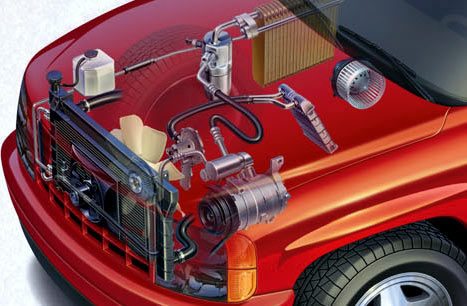 How a Car Aircon System Works

During the humid/hot season, the air conditioner can be a Godsent – the best invention by mankind.

Now, the cool breeze comes from more than a simple flip of the switch to turn the air conditioner on. The air conditioner itself is a system of parts which includes the piston and compressor, among others. When these parts of the AC work together, they manage to regulate the air pressure and allow it to circulate the heat and remove moisture.

A/Cs all over the world work with more or less the same concept and that is thermodynamics and physics. When various parts are put together, a simple wiring can make them function as a whole new item. 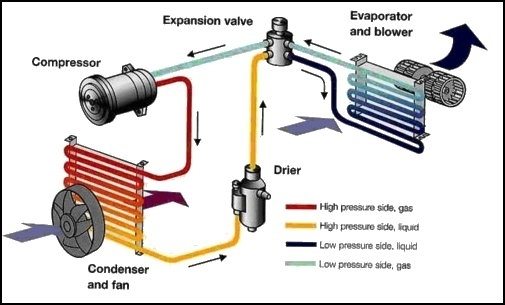 There are, in particular, 5 parts in the A/C system that work hard to ensure that you get that nice cool breeze during the blazing summer.

Without a compressor, say goodbye to the cold wind from your A/C. While it is still possible to create cool air without one or some other parts of the air conditioner, it is impossible without the compressor (unless you bring a box of ice to cool your car down, which is actually possible).

The compressor is the part of the A/C system responsible for pumping the refrigerant into the system. The pumping has to be done in high pressure, which is a job that only the compressor can do.

Note that a condenser  is not the same as a radiator, it just looks similar (don’t we hope car manufacturers can do something about similar looking parts of a car?).

Like the name implies, it receives the refrigerant that is now in liquid form. This small reservoir’s role is to remove any moisture, debris, and other substances you don’t want to see blowing into your face and car. Without removing them, the system will go awry in no time as debris blocks the airway and its several parts will leak, freeze or break.

If moisture is allowed into the AC system, you may find yourself in the mechanic shop sooner than you expected. The moisture can lead to ice crystals forming and result in air blockage and mechanical damage.

Some cars have different AC systems with either a thermal expansion valve or accumulator. Both actually do the same job but let us explain why they are different. What the thermal expansion valve and accumulator both have in common is that they prevent any moisture from leaving the evaporator and causing havoc in the system.  Both also use a type of desiccant to clean up the refrigerant before air is blown out from the AC system.

Now, how are the accumulator and expansion valve different?

Expansion valve opens and closes according to the the level of coolness you’ve set. At the same time, it also moves on its own based on its sensing bulb to ensure that the refrigerant is cool enough for the temperature outside the A/C. It is flexible and decides how much should be allowed into the evaporator.

Orifices tubes, on the other hand, don’t move. You are stuck with the same size until the time comes for you to change to a new orifice tube. So, which part of the A/C regulates the amount of refrigerant? That would be the compressor and also several additional parts to ensure that the flow is adjusted to your demand and need. Some of you may opt to install a valve to regulate the cooling system if the compressor cannot do the job.

From this, you might be able to guess that orifices tubes have to be changed once in a while. When you install a new one, make sure that it is according to the manufacturer’s code. It is not too expensive and is usually perceived to be the economical choice to make. As for thermal expansion valve, it allows more control on your side but can be more expensive to install.

The evaporator is located close to the passenger seat, usually behind or around the footwell. The evaporator cools the refrigerant and makes sure you get that bout of cold air that maintains your car’s temperature. The evaporator is also part of the AC system that absorbs heat and allows the interior of the car to cool down, causing the cold wind to blow off the vents after you switch the A/C on.

Now, understanding the parts of the AC that work together in providing a cool breeze is important when something goes wrong in the system. For example, most of the time when the A/C is no longer blowing cold air, but still blows the same pressure, it’s either due to the lack of refrigerant that enters the evaporator or a poor performing evaporator. If you notice a quick drop of refrigerant, there must be a leak in the system which can be frequently checked with a fluorescent dye.

Therefore, it is important to know the respective functions of the various parts to better diagnose a fault in the AC in case of emergencies.

You can check out our other articles on how to fix your car’s air conditioning system and how to refill the refrigerant of the AC. If this is beyond your abilities, do not hesitate to Call us today at (07) 3269 3158 or pop into our workshop 113 Connaught Street Sandgate QLD 4017.

Got a Question for Us?