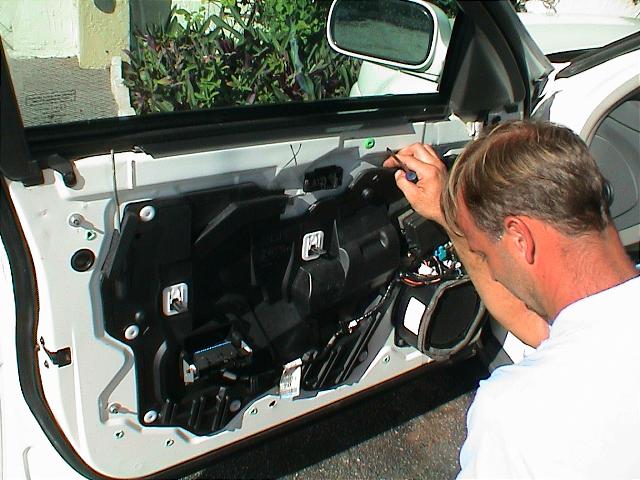 Trying to repair power windows can be rather tricky. But, luckily with some patience and using the correct tools, you can ensure your windows are back on track in no time.

Broken power windows can be a real annoyance, especially if they get stuck during the scorching summer heat or chilly winter in the middle of a storm.

Troubleshooting and fixing your power window problem can be done by following these steps, in a few hours.

Power windows in modern cars are generally very reliable systems, but that doesn’t mean they won’t ever fail. If you ever find yourself in that situation, it’s rather straightforward to diagnose and repair the problem, if you are handy with tools.

You can find the power window mechanisms inside your car door. They let you open and close your car windows. The majority of modern cars have electric windows. These windows are opened and closed by using a switch.

Over time, the mechanisms and motors can become worn out, or damaged.

There are some factors which will put stress on the window mechanism. Stickers, and car window tinting, effectively increases the window thickness and add extra resistance to opening and closing a window. Likewise, operating an electric window during frosty conditions will also do the same, when the window is frozen shut.

There are different varieties such as sector, rack, and cable drive. To troubleshoot you will need to remove the door panel.

There are a number of different steps to take when troubleshooting power window problems, they include:

Check All The Windows

Is it only one which isn’t working, or is it all of them?

If all of the windows won’t budge, then you should first check the fuse.

Power windows are high-current devices. The fuse for the windows is sized only just to be able to open all four windows at the same time.

The age of the fuse and some sticky window problems can be enough to blow a fuse.

How can you check if it’s the fuse? Turn your car key, but don’t start it.

If the fuse is blown: when you push a window button, nothing will happen. There won’t be noise from the motor, and the window glass won’t shake.

If it’s a fuse problem,  you will need to locate the fuse box. If there are no labels on the box, then consult your owner’s manual to find out which fuse is guilty of causing the problem.

Don’t just remove fuses one by one to locate the blown one. Doing so can lead to causing problems with other parts of your vehicle, such as resetting the engine management computer or resetting your car radio back to its default settings.

The Fuse Is Ok

If the fuse isn’t blown: you will be able to hear the motor. Or, is the glass trying to move? If so, then it’s not a fuse problem, it’s a mechanical problem.

Is it all of the windows which won’t move? Or just one?

If it’s one, then you’ll need to investigate inside the door panel.

But, if it’s all four doors, then there might be an easier way to troubleshoot, by looking under the dash.

You will discover somewhere a loose or corroded connector. This will stop the voltage from flowing to the motor.

Perhaps the switch itself may be faulty, instead of the wiring.

To test if it is a problem with the driver’s door switch, try using the switch on the passenger side door, as well as the switch in both of the rear doors.

If the door switches work, then it’s most likely a fault with the switch on the driver’s door. Otherwise, it could be a fault in the intervening wiring.

Next, carefully back probe the window switches, to see if any electrical faults in the switches, wiring or connectors can be isolated.

Here is a video which demonstrates how to check for an electrical problem and to see if your motor is working. 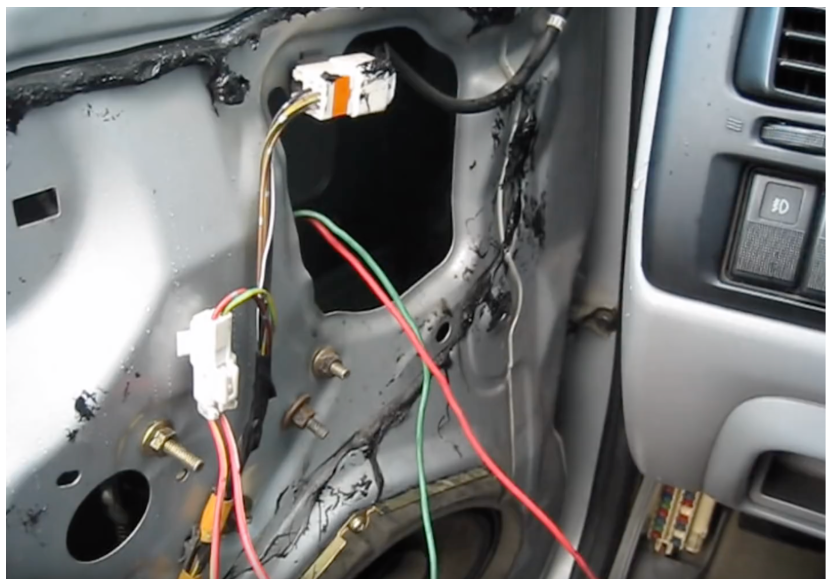 To be able to test the wires connecting the switches, you will need to access the inside of the switch panel. Each vehicle has a different way to access it.

For some vehicles, you can easily pry open the panel with just your fingers. Then you can back probe the connectors.  However, for other vehicles, you may need to remove the switch panel.

Door panels are securely fastened using a variety of fasteners. First, remove all of the handles and door pulls. The outside of the panel is held in place using delicate plastic studs. These studs are made for one use once only. Carefully pry them up, making sure not to break them.

After removing the door panel, next, you need to take off the weather sheeting carefully. You will need to replace this later on and to do so; you may need fresh contact cement.

Be Careful: Make sure that you don’t activate the power window while you have your fingers  in the gears while you are inspecting it.

Cable and reel window regulators are uncomplicated mechanisms. However, you need to take care to make sure that you have correctly routed the cable. Otherwise, it may cause a jam.

You can watch this instructional video for step-by-step instructions on how to remove a door panel. 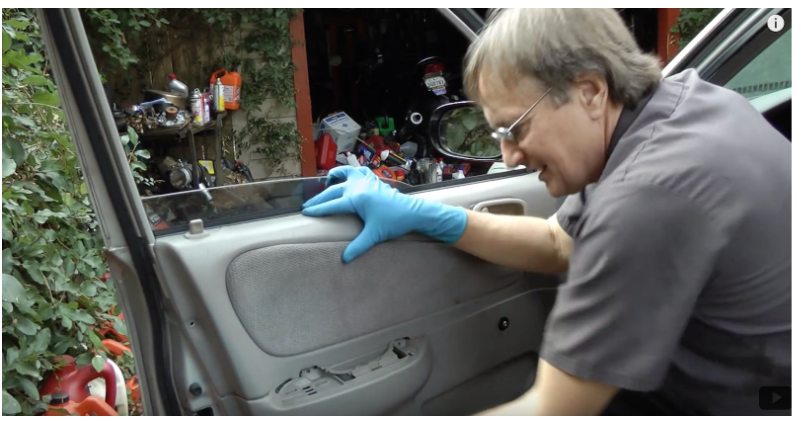 Proof Of An Electrical Problem

To be completely sure that it is an electrical problem, you can run a jumper wire directly from the battery positive terminal and connect it with the positive side of the motor. Does it come to life?

You should be mindful that some window regulator systems will constantly supply 12v. They will also switch the ground side of the circuit. Check the schematic of your vehicle.

Most vehicles will also be able to lock and deactivate the rear windows. Check to make sure this has not been activated, if it’s only a problem with the back windows.

It’s also possible, in some rare occasions, that there may be a problem with the motor, and it will need to be replaced.

If not, tracing the wires will lead you right to the problem.

Loose fasteners can also lead to severe misalignment which can jam gear-type regulators.

The following video has more detailed information on how to troubleshoot car power window problems.

All power windows also use gaskets and seals as a way to keep the wind, rain, and noise out of the vehicle. If you find your window won’t open or close properly or has a slow spot, then you should check the gaskets. If there is a problem with the gasket being torn or misplaced, it can stop the power windows from working properly.

The good news is that you may be able to replace a torn or loose gasket.

For a loose gasket, you need to get some weatherstrip adhesive glue from any auto store. Just clean off the old adhesive glue. The best way to do this is with lacquer thinner. Then re-glue the gasket.

Make sure the window is closed, and let the glue dry overnight.

Be very careful to make sure that you don’t glue the window to the gasket.

For a torn gasket, it may be possible to fix the tear by using super glue. You can trim a corner of the gasket which is loose by using a razor blade.

It is easy to replace a gasket or a seal with a new part. 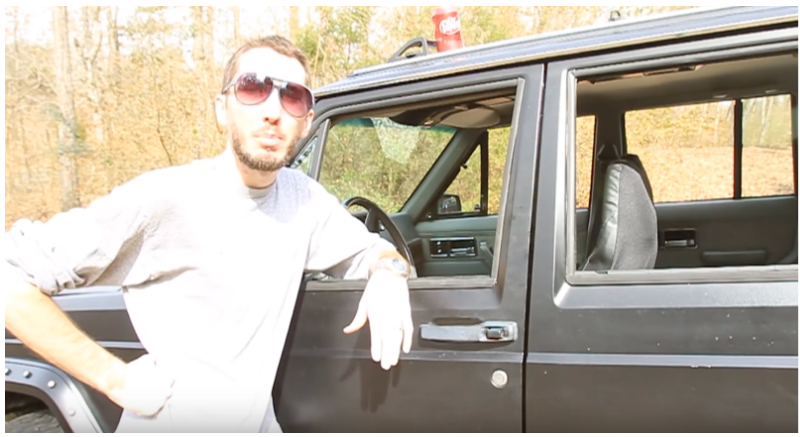 This video shows you how to replace a gasket/car window seal in just a few steps.

Depending on the make and model of your vehicle, and what exactly is the problem, the cost of a new window regulator is generally in the range of $300 to $450. Although sometimes, it can be a bit more expensive.

Generally, window regulators are built to last for the lifetime of the car, but occasionally unexpected failures can occur.

Usually, windows which move the most frequently will require replacement first. It is most common for the driver’s side power window needing to be replaced before the other windows.

There are kits available for different vehicle makes and models.

If there is only one part you need to replace for your power window repair, you don’t need to buy an entire kit.

Power window repair parts are available as both genuine parts as well as quality aftermarket solutions.

Save money by buying individual:

They are available for all makes of vehicles including European, Japanese, American and Korean vehicles, ranging from small passenger vehicles to commercial vans, and trucks.

There are many power window repair shops located around Australia. So whether you are in your hometown or the middle of an epic cross country adventure, you always have peace of mind that if you experience a power window problem, that there is a repair shop nearby.

Power window repair shops can offer repairs on-site, or come to your home or office, for ultimate convenience.

They can repair most models and offer a quick turnaround time, to have your power windows working again ASAP.

Sandgate Auto Electrics are experienced power windows repair experts. If you are looking for a professional power window repairer, contact us today for a free quote or to book a service. Call (07) 3269 3158.